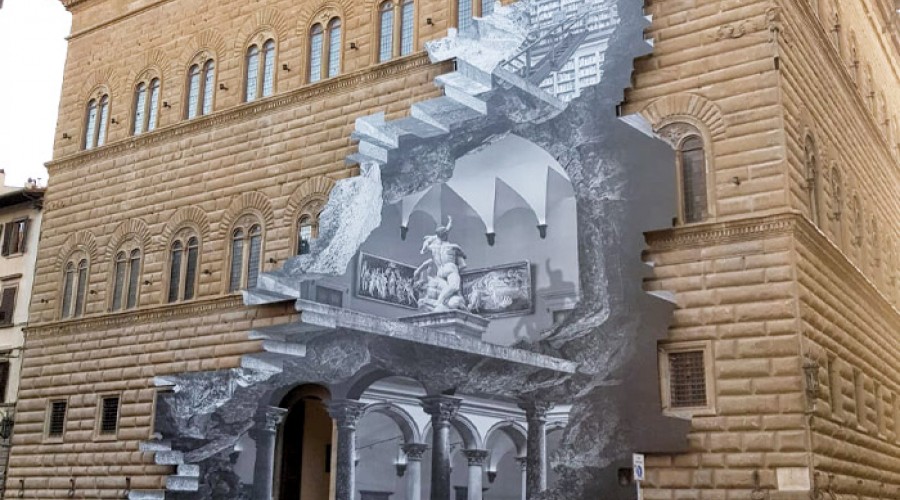 Palazzo Strozzi has unveiled a major new installation by acclaimed French contemporary artist JR, whose site-specific artwork La Ferita (The Wound) has reinterpreted the façade of the Renaissance palazzo, opening it up to reveal a vision of an interior at once real and imaginary achieved with a black and white photographic collage to trigger a debate on the accessibility of culture in the age of Covid-19.

This latest work La Ferita imagines the Renaissance palazzo with a deep wound or gash revealing the interior of the building with some of Florence’s most iconic artworks occupying the space. Measuring 28 metres tall and 33 metres wide, this monumental photographic collage installation covers the primary façade of the Palazzo Strozzi and works like an anamorphosis, an illusion in which, observed from a specific viewpoint, various areas of the Palazzo Strozzi – the colonnade in the courtyard, an imaginary exhibition hall and a library – open up as a wound.

By including iconic works of Florence’s art heritage and directly citing real places such as the library of the Istituto Nazionale di Studi sul Rinascimento, JR proposes a direct and evocative reflection on accessibility not only to Palazzo Strozzi but to all cultural sites in the era of Covid-19. Palazzo Strozzi becomes the spectacular stage for a symbolic yet painful wound suffered by all cultural institutions both in Italy and abroad: museums, libraries, cinemas and theatres forced either to restrict audience access or to shut down altogether. Looking ‘inside’ Palazzo Strozzi also has the makings of an act of voyeurism designed to reveal that which cannot be seen: the depiction of a reality that goes beyond what one can customarily behold.
The project is promoted and organized by Fondazione Palazzo Strozzi and Andy Bianchedi in memory of Hillary Merkus Recordati.
Fondazione Palazzo Strozzi supporters: Comune di Firenze, Regione Toscana, Camera di Commercio di Firenze, Comitato dei Partner di Palazzo Strozzi, Fondazione CR Firenze.
With the patronage of Institut français Firenze. Thanks to Galleria Continua for the collaboration to the JR’s project.
JR
JR has created monumental photographic collages that have inspired audiences around the world. As the artist remarks; “I have the largest art gallery you can imagine: the whole world’s walls.” JR’s research merges originality and appropriation, standing out for its strong public and participatory character and leading him to create works with an intense visual impact in spaces from the favelas in Rio de Janeiro to the Louvre in Paris; Ellis Island in New York to Tehachapi maximum security prison in California.
info www.palazzostrozzi.org